A Hall Of Stolen Treasures

Many people would agree that taking something that is not yours isn’t the right thing to do.  From robbing money, to taking your girlfriend’s french fries, (that’s how you end a relationship.)  However, many might not know about what many would consider as a thief.  A museum.  Commonly known museums, like the Getty, the Metropolitan, and our main focus of the day; the British Museum, have been found displaying items that were stolen by their native origin.  More than 900.  Many were bought without the permission of the people and not even sold to the museum by them.

One example is the Parthenon Marbles from Greece. 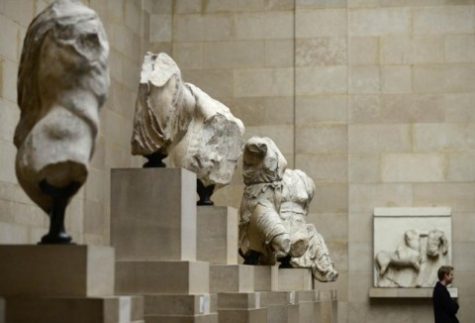 These statues are made of marble, and originated from Athens, Greece.  At the temple of Athena, on the Acropolis.  The sculptures take the shape of ancient gods and mythical heroes of it’s time.  These statues were sold to the British Museum by Lord Elgin, a Scottish nobleman.  Although he has claimed that he was granted permission by the Ottomans to remove the marbles, there hasn’t been a single written permission nor document as evidence.  He had stated to protect these historical artifacts, but the statues were less than taken care of.  For Greece, the artworks represent their ancestors’ creativity.  “…the removal of the Parthenon sculptures represented the destruction of a unique and beautiful whole,” attests the University of Glasgow, “…that the Parthenon Sculptures are strange and out of place in the British Museum. They were designed to be in Athens at the Parthenon.”  The statues were meant to be all one piece of artwork, but now half of them are in Athens, and the other half at the museum.

This isn’t the only case. 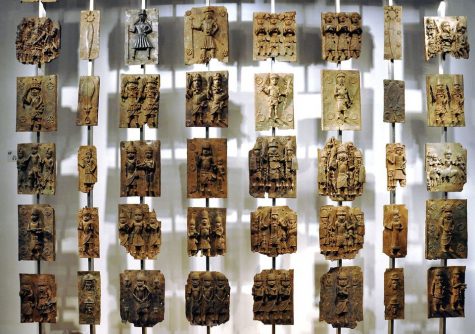 A very popular one includes multiple artifacts located at the British Museum, the Benin Bronzes.  These artifacts, made of brass & bronze, include a variety of objects.  To full 3D heads, to metal plaques.  These items were mainly to glorify the Oba, the divine king.  But these historical artworks were not bought by the people of Benin, which is located in today-Nigeria.  But instead bought by British men who stole it from the region’s palace in the aftermath of the “Benin Punitive Expedition”, which resulted in the death of the kingdom in 1897.  They stole the treasure to be able to pay off the cost for the invitation.  For Benin, the artifacts are indeed very important to their people.  “At the time Europeans were keeping their records in long-hand an in hieroglyphics, the people of Benin cast theirs in bronze, carved on ivory or wood.” mentions Anthony Okosun, “Taking away those items is taking away our records, or our Soul.”  Basically, the people of Benin wrote their history in the arts.  Whether it was in plaques, or engraved in ivory tusks.  And since their are very few handwritten scripts about Africa’s past, they don’t have much records in their names.

Now both the marbles and the bronzes, Greece and Benin have one of the same question.  Should these historical artifacts be returned to their home countries, or remain in the world’s oldest national public museum?  It’s a huge debate of whether or not who should keep the artifacts.  Not just the ones mentioned here.  But not everything is as black and white as it may seem.  Not everything is as simple as an argument with just heads or just tails.  Let’s see this from two points of view.  Let’s take a step back to understand both sides of the coin.

Why should the artifacts stay?

Of course, the museums would like them to stay because of how well-known these items are.  It’s most popular one being another looted treasure, the Rosetta Stone.  Many of the British Museum’s looted treasures are quite popular in fact.  Money is another reason.  Don’t forget, the museum didn’t get those artifacts for free.  There are rules that play along too.  The British Museum Act prevents the museum from returning the artifacts, but it has exceptions.  However, looted treasures doesn’t seem to be one of them.  The museum can also argue that these pieces of work should stay for the world to see, not just the people that originate from the cultural artifacts.  And for the British museum, it ain’t fiction.  It’s located in London, one of the world’s most multicultural cities.

Why should the artifacts return to their original homes?

These artworks are something that was taken from, so it would be the right thing to return them to where they came from.  But the rabbit hole goes deeper than that.  These artifacts present the historical identity of the region it belongs to.  In some cases, it may be the only few items that the people have of their ancestors.  Tools that can be used for teaching the younger generation.  Plus, only one percent of the museum’s artifacts are in display!  So there wouldn’t be too much of a problem to replace them.  And since these are “looted” treasures, it makes more sense that the people of the home origin should have these items returned.

Although the British Museum did pay for the artworks and make a good point of displaying them to the world, most have agreed that the artifacts should return to their home origin.  And I agree.  The museum has been requested numerous times with no reply to the people.  The British museum needs to let the looted treasures be returned to their region’s roots for the people of ITS roots.  Their cultures, histories, and ancestral creations are all found in them.  Both the people of the item’s origin and the museum have to find a solution together, or problems would just get worse.  If we focus in just one side of the coin, we will start losing interest in the other side.  There has to be an understanding from both heads and tails.  That way, we can get a better head start in finding the answer.  It might take years, even a generation for the artifacts to be freed from their locked cases, but voices can’t stop being heard.  This is a robbery that cannot be left ongoing.