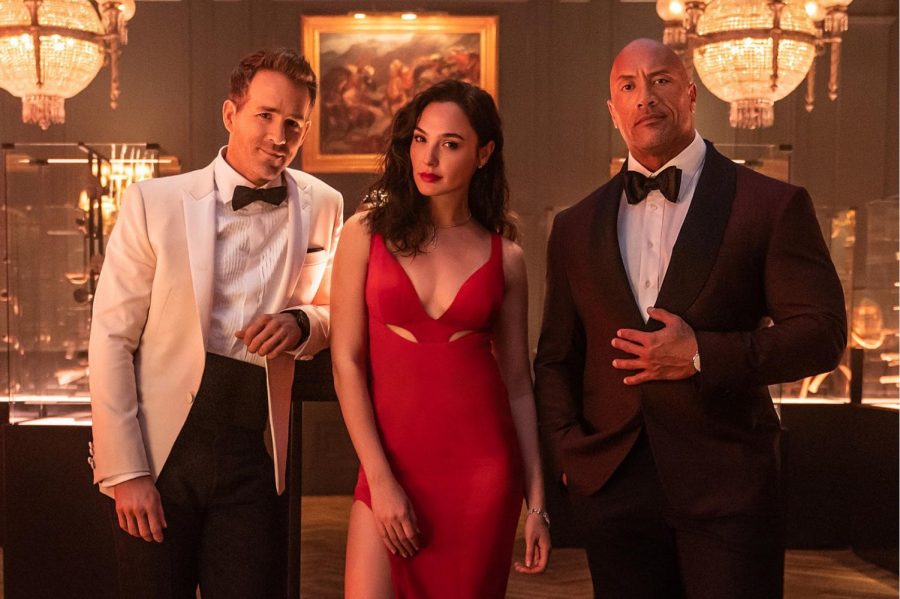 It’s not quite as popular as “Squid Game” in terms of streaming numbers or social media engagement, but it’s also not a complete disaster. Fans of Dwayne “The Rock” Johnson and Ryan Reynolds will love “Red Notice,” even if it’s just to get a fix of the two actors in between episodes of their more well-known series.

Johnson plays John Hartley, an astute FBI profiler who apprehends infamous art thief Nolan Booth (Reynolds), only to be framed for the same crime and imprisoned with Booth.

The Bishop (Gal Gadot, better known for her Wonder Woman fame), a female fatale art thief set on stealing all three of Cleopatra’s famous golden eggs to sell on the black market, turns revealed to have played both of them.

The characters end up in exotic locations like Bali, Rome, and Argentina as a result of the cat-and-mouse game that ensues.

While the plot — hesitant partners banding together to defeat a common foe — isn’t very original, the chemistry and charisma of the film’s leading males make the familiar setting feel fresh. Reynolds, much to Johnson’s dismay, openly outs Johnson as a member of law enforcement in the middle of a Russian prison canteen in a particularly funny sequence. After a daring prison break, the two are grateful for a change of clothes — until Johnson discovers that all he has is a glittering jumper with the words “Gotta Dance” on it.

The film’s most enjoyable parts include these and other scenes in which the two leads playfully annoy each other. Gadot spends the majority of her time on screen kicking, tripping, and generally incapacitating the males of “Red Notice” in order to obtain what she desires. Whether intercepting a phone call from an INTERPOL Inspector or posing as the warden of the gulag they’re imprisoned in, her character can fool Hartley and Booth with ease.

As entertaining as it is to watch a female nemesis go toe-to-toe with two action heroes, her character lacks development beyond the ability to fight.

Both Booth and Hartley have backstories about how their fathers influenced their job choices. We discover the most about Gadot’s “Bishop” from a twist disclosed in the film’s last minutes, and even that doesn’t provide any real insight into her reasons.

Inspector Das, a minor character played by Ritu Arya, is more developed than Gadot’s character. Nobody is watching “Red Notice” for the social criticism, the great plot, or the jaw-dropping photography. They’re watching “Red Notice” because they want to see their favorite actors portray action-hero versions of themselves while cracking a few laugh-out-loud gags. If you approach it with that perspective, you will not be disappointed.