The University of Colorado Boulder has always been known as a party-heavy school. But on March 6, the party scene turned into chaos as hundreds of students gathered for what seemed to be an average party on the hill. What started as a small gathering quickly turned to an unmanageable number of people. “The street party involved 500-800 people,” according to The Denver Channel.

With an overflow of drunken 20 year–olds flooding into the streets, chaos was bound to ensue. As police showed up to break up the party, some students decided to take the violent approach. Three of the officers were badly injured in their attempt to break up the mob; they were struck with bricks, and rocks. 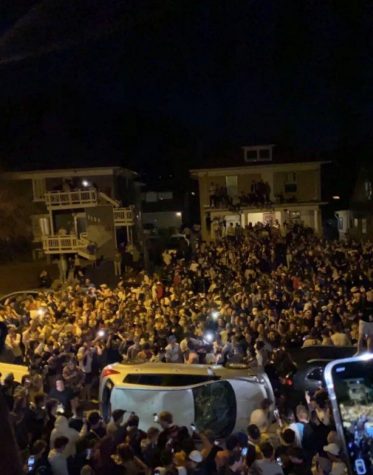 Later, the some party-goers thought it was a fun idea to flip over a car.

With police cars and firetrucks on the scene, students only escalated the “party” by throwing things at the squad cars, and climbing on the firetrucks. The party caught the attention of SWAT, who showed up only to be greeted with objects being thrown their way.

The following days, CU Boulder issued statements regarding the actions that will be taken to punish those involved in the incident. “You have embarrassed this University, you have embarrassed your peers, you have destroyed a beloved residential and historical area of our community and you have jeopardized the safety and health of your neighbors and community at large.” This was in a letter from the chancellor of CU. The university will also try to track down those at the riot who were violent towards law enforcement, as well as those who caused damage to property.

Students who are identified may face expulsion from the school, as well as legal penalty. The students who were apart of the crowd and not causing damage will not have anything to worry about. The university and police are more concerned about those who caused damage and were belligerent towards the law enforcement.

Though the actions of the students on the evening of March 6th were regrettable, it makes sense why it happened. Forcing mass amounts of 18-24 year olds to stay inside and not party simply does not work. A riot is not the correct response, but a large party on a warm Friday evening came as no surprise. Either way, many of the students left the party with no repercussions, and perhaps the greatest party story to ever be told.