A look into the 2020 Holy Family football season 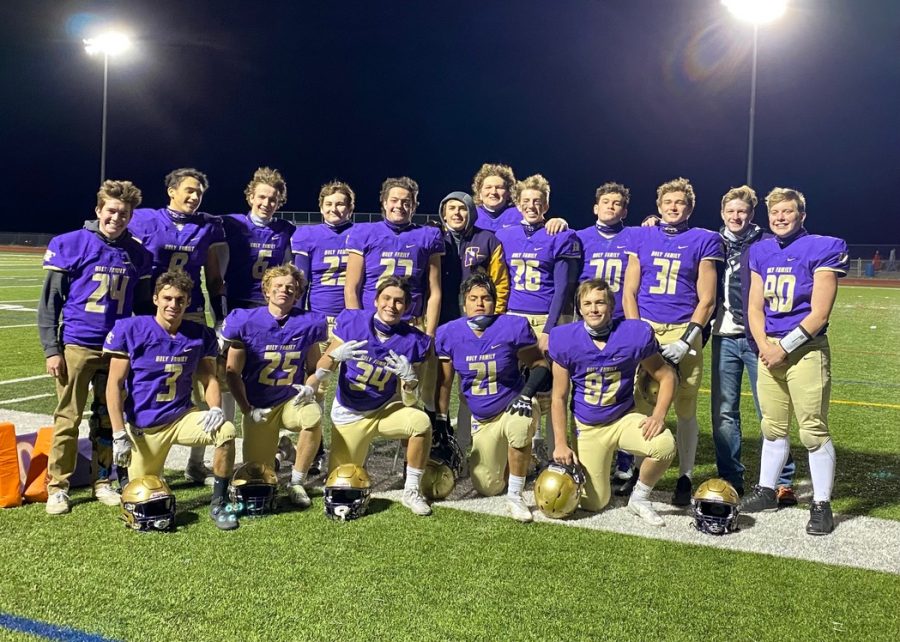 Holy Family Football: A team of tradition that has been overlooked by most schools in the Class 3A. But this year has been a completely different story for the Tigers.

Coming off of a strong start to the season at 4-0, the Tigers went into the fifth week with a league championship on their mind. This game unlike some prior would not be anything of a cakewalk.

The Tigers face their toughest opponent in their regular season schedule, the Lutheran Lions who were undefeated and ranked No. 1 in the state. The week of practice for the Tigers was a very crisp and highly intense week of preparation.

The Tigers even with all of the pressure to remain undefeated, were able to keep their eye on the prize. The Tigers showed up to the home of the Lutheran Lions on Friday ready for a fight. The Tigers despite being on the road felt like they were home.

When asking senior Brody Welch what he thought in the moments leading up to the game he said “It was the biggest game of the year and with that came some nervousness.”

The Lions stalled on offense and tried a fake punt to no avail due to senior Justin Trostel obliterating the punter on the sideline (short of the first down). It was time for the Tigers offense to take charge and capitalize on the defense’s dominant stand.

Senior Michael Patrick White took the field and with a game of ground and pound scored the first touchdown of the game. Senior Trevin Johnson ended the first quarter with one more rushing touchdown.

Going into half the Tigers were up 17-7 with some disappointment on their face. Coach Mike D. Gabriel told the Tigers that they needed to have that same energy they did in the first and be more aggressive. The Tigers went into the second half with something to prove.

Immediately out of the gate White threw a 40-yard touchdown pass to senior Oscar Sena. The Tigers kept their foot on the gas pedal and with the help of senior Liam Gray’s touchdown, the Tigers went up 31-7.

The Lions, despite some great Tiger defense, were able to score ending the third quarter to cut the score to 31-14.

Heading into the fourth quarter the Tigers wanted to put this game even further away. We asked senior Logan Erickson why they wanted another score so badly, he responded with “Run up the score baby.”

The Tigers did exactly what they wanted to do and with the help of the mobile White, who scrambled outside the pocket and rushed in for the final touchdown of the game for the Tigers.

Holy Family won the game with a score of 38-14. But, the Tigers wouldn’t have won if it wasn’t for the amazing defense. Jacob Lawver had two interceptions, Benito Hernandez destroyed the center on the line causing bad snaps and Brody Welch brought the pressure from the inside stressing the Lions quarterback and causing bad throws.

We asked Sr. Thomas Pittenger what this win felt like, he said “The win at Lutheran showed what our culture is. We are smash mouth, we might not have the biggest athletes or the strongest, but we showed how much heart we have. It was great winning league and being part of this team. I’m proud of my teammates and I’m proud to be a Tiger.”

The Tigers have beat the Lutheran Lions and won the Colorado League title and were still undefeated at a record of 5-0 with one more regular season game to go. The Tigers are heading into the playoffs aiming at a state championship.

Holy Family hasn’t won a league championship for football since 2016. The Tigers know this won’t be an easy task, and are preparing everyday as if the game is the next day. For some though this is that last season of football they might ever play.

We asked the seniors what this season meant to them, they said “It’s special we were able to come together and do some damage this year and prove ourselves. Especially for a lot of us this is our last ball, it’s just nice to have a shot to finish on top. This season though wouldn’t of been possible without our amazing coaches and everybody who helped out. So from all of the seniors thank you!”

The Tigers are headed into the first game of the playoffs November 20th playing Evergreen High School. The Tigers thankfully came out victorious and advanced into the semifinals for the first time in two years against Durango.

The Tigers practiced all of Thanksgiving break and even on Thanksgiving morning to prepare for the game. Sadly, the Tigers couldn’t pull a win out and lost to Durango by a score of 34-14.

After the game the seniors were congratulated by the coaches and other players for making the program whole again. The Tigers had a spectacular season with a final record of 7-1 and were league champions. See ya next year football.